Ash Park Playground – The Past Meets the Future 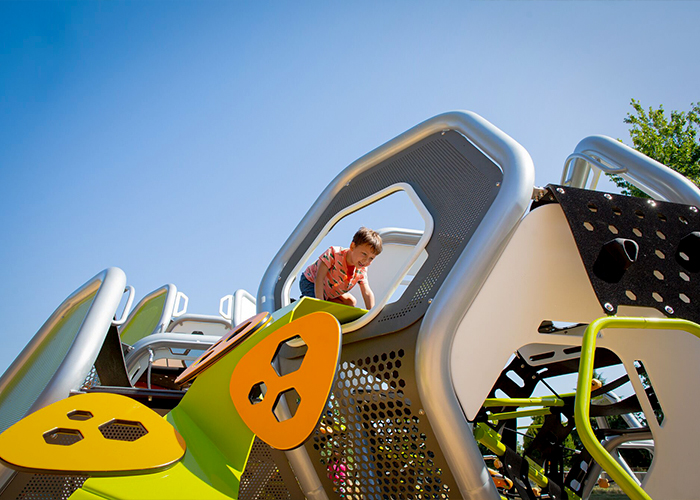 If you are walking around one of Vancouver’s oldest neighbourhoods this spring, you may notice a playground like none you have ever seen before. Brightly coloured geometric pods connected by wide belt climbers, bridges, overhead bars and ropes, make for a stunning and contemporary play structure. Its configuration alone is inspiring, with multiple portal-like entry and exit points for kids to discover as they scramble up, over, and through it. You are invited to stretch your imagination with its non-prescriptive design and a myriad of ways to play on it. The first Hedra® in Western Canada is making its home in Marpole’s Ash Park Playground. 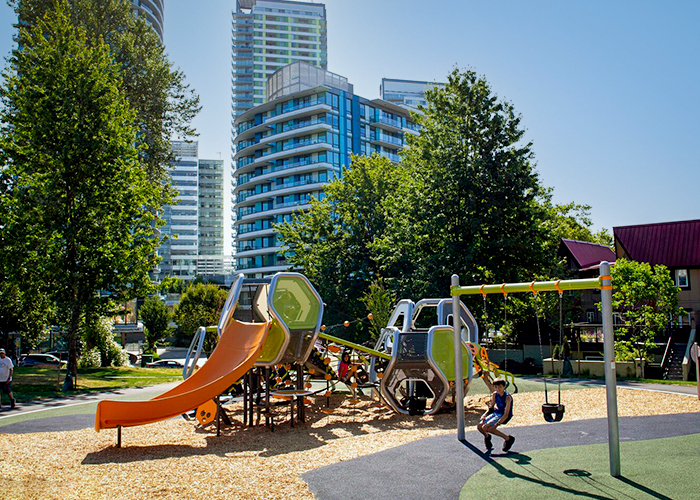 Standing on Ash Street beside the park, the view that rises up behind the Hedra is of condo towers in the vibrant, bustling area of Marine Gateway. The Ash Park playground straddles the established residential neighbourhood and this hub of new business, high density condo developments, and major transit core at the southern end of Marpole. The area that is now Marpole was once a Musqueam village named c̓əsnaʔəm and sits on the ancestral, traditional and unceded territories of the Coast Salish Peoples of the Musqueam, Tsleil-Waututh, and Squamish nations. In the late 1800’s, the area was known as Eburne Station by settlers. By 1929, Marpole had become one of the city’s major industrial centres, with the riverfront developed by industries like sawmill, and sand and gravel companies.

Just down the road from Ash Park you will find the Marpole Midden National Historic Site of Canada in Marpole Park. It is the site of one of the largest pre-contact middens on the Pacific coast of Canada and contains cultural remains of the area’s oldest inhabitants dating back thousands of years, from about 400 BC. 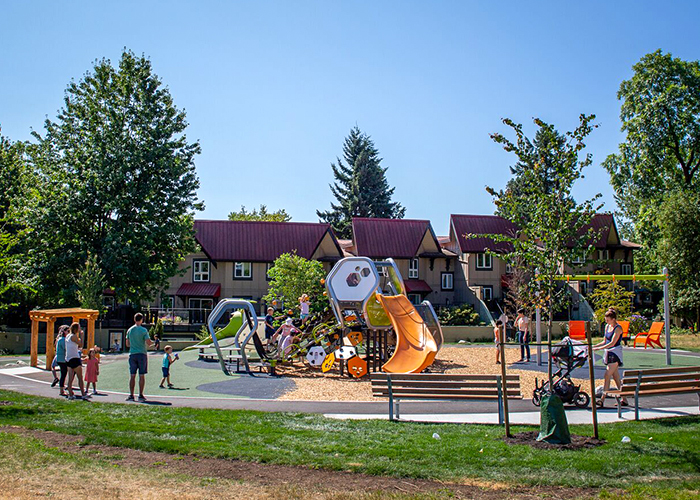 The Ash Park playground, along with several other Vancouver playgrounds, was allocated for renewal by the Vancouver Park Board in 2019 due to its age and condition. The old, wooden structure was dated and worn out. The vision for the park included new accessible paths, bike racks, picnic tables, benches, and a contemporary playground area.

A number of considerations went into the final decision to go with the Hedra structure. To ensure accessible travel to the playground, it was important to keep pathway slopes to a minimum while maintaining existing grades around preserved trees. This helped guide the size and shape of the playground area. Jonathan Corlett, a Landscape Designer formerly with Durante Kreuk Ltd. in Vancouver who worked with the Vancouver Park Board on the design of Ash Park, said, “the idea for this play structure was to stand out and be bold.” They didn’t want something that blended in, but rather something new and exciting. The Hedra fits the bill as well as the scale of the site perfectly. It is ADA compliant and packs impressive play value in its design. It also looks stunning with a futuristic aesthetic, sitting in this diverse community with such a long and rich history.

Contact us today to learn more about the Ash Park playground or to get your own playground project in motion.